We have completed a first approach to classify all 43 counties intersecting the Delaware River Basin based on urban growth and urbanization (see map below). Using cluster analysis, we detected 6 significant county groups within the DRB in metro, suburban, or rural areas. Our goal was to establish more homogenous groups for use in the land use models we will test early next year.

The NOAA Coastal Change Analysis Program (C-Cap) Regional Land Cover data we used provides continuous data in time and space to make this analysis possible. We performed the analysis over 14 years, using snapshots of land cover data from 1996, 2001, 2006, and 2010. We identified urbanized areas, based on impervious cover types, and calculated characteristics of their structural spatial pattern and dynamics of change. We also used the roads system due to its significance in economic development and its role in attracting new urban development in the landscape.

For each county, variables were obtained for: urban growth, urban center size, percentage of area urbanized, and road density. Urban growth was calculated by year for the whole period analyzed (1996-2010) and for the intervals between years, and represents the percentage of available area that had been developed. Two measures of road density and urbanized area were taken: one referenced to the total county area, and the other using only the area available for urbanization. Any group of more than three adjacent urban pixels was considered urban center; descriptive statistics were then calculated, such as mean, standard deviation, and largest center both for the entire period and for intermediate intervals. 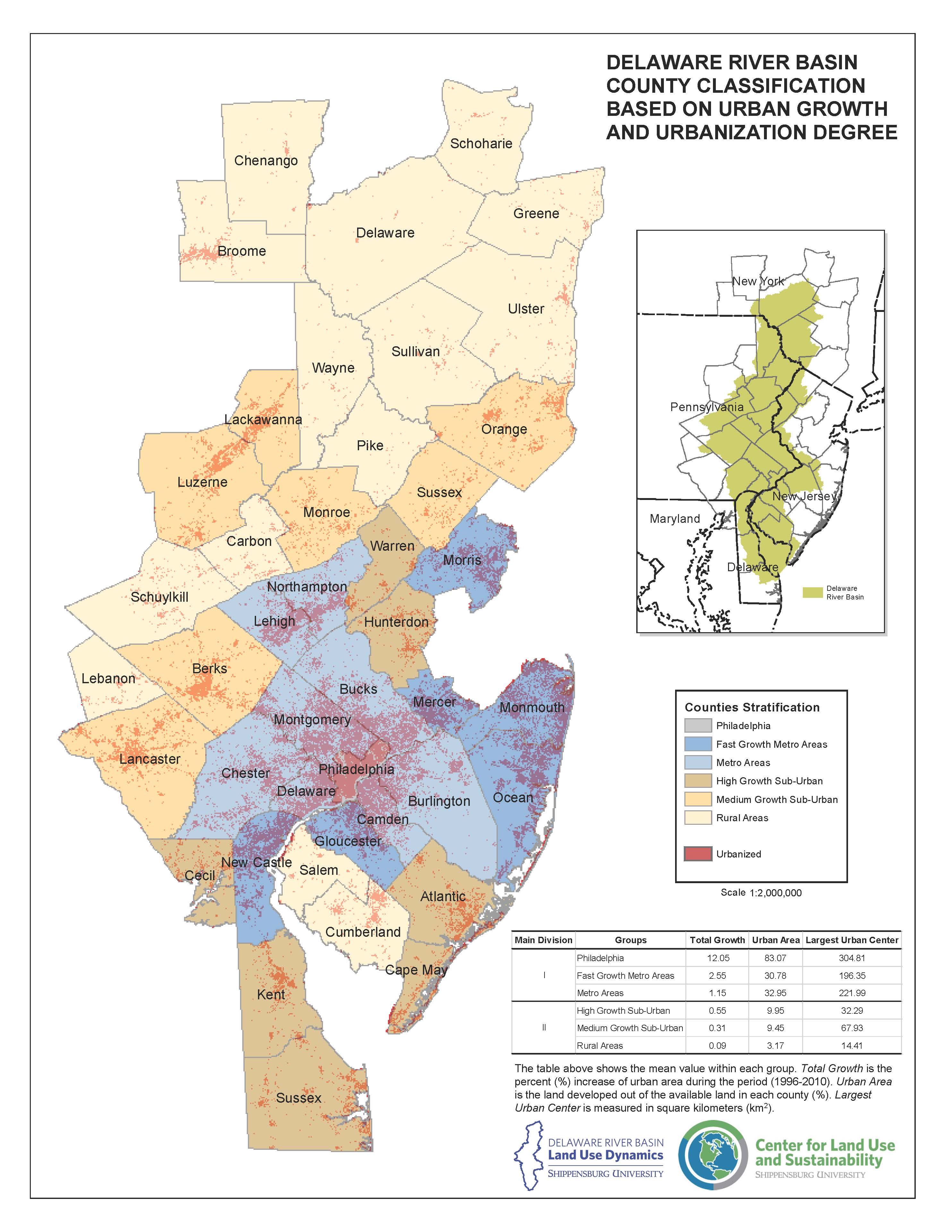 To find groups, we performed cluster analysis using the urban variables discussed above. The most significant factors in the cluster analysis were found to be: total growth (new development over the entire period), urban area (percentage of urban cover over the available land), and largest urban centers.

As seen in the table with the above figure, counties are arranged along a gradient of urbanization intensity from Philadelphia, to suburban and rural areas. In the first stage of analysis, structural factors were more significant than growth to differentiate metropolitan counties. Metro areas outside of Philadelphia were found to have approximately 30% developed land, while suburban and rural areas had less than 10%, establishing a clear boundary. In general, counties in metro areas reflect a higher growth rate and, as we expected, larger urban centers than the suburban belt. As the most populated cluster, Philadelphia also shows the highest rates of growth and urbanized areas (>80%). However, the high growth in Philadelphia overshadows the fact that it has one of the lowest increases in urban area, making the county a special case. In Philadelphia, area available for development is a scarce resource; it is likely that growth is reflected more in the internal dynamics of the city than in new urbanizations.