DRB2070 Workshop Summary and Next Steps

We held our fifth DRB2070 workshop last month just outside of Dover, Delaware. To date, our workshops (in Philadelphia, Narrowsburg, Reading, Washington/Harmony, and Dover) have attracted 60 attendees from all over the Delaware River watershed. Participants identified current strengths and weaknesses of and within the basin, and they offered what they foresee as future opportunities and threats.

We are using NVivo, powerful data-mining software, to analyze all of our participants’ comments and map annotations. Our exploratory data analysis has revealed several themes that ran through participant conversations. In the graphic below, the major themes were clustered into groups based on the similarity and frequency of words people used to talk about them. For example, the themes “infrastructure” and “transportation” were clustered into the same group because those words and their variants tended to occur together in the same conversation. On the other hand, the themes indicated by “Energy” and “Tourism” were hardly ever used together during the same conversation. 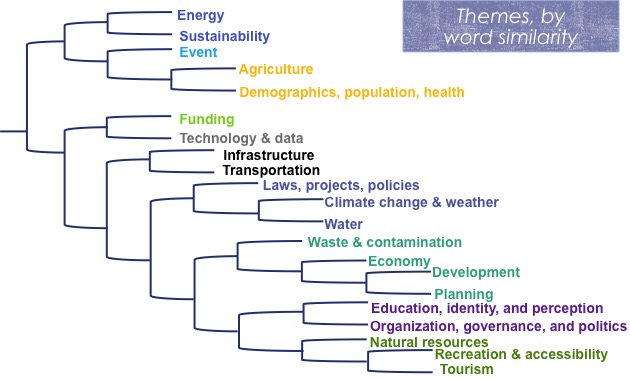 We also found that workshop discussions cluster differently when looking at word similarity (and frequency) as opposed to theme similarity. For example, Narrowsburg and Philadelphia discussions cluster in both cases, while Washington/Harmony is more related to Dover when looking at word frequency, but closer to Reading in terms of themes discussed. 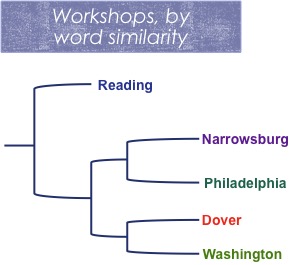 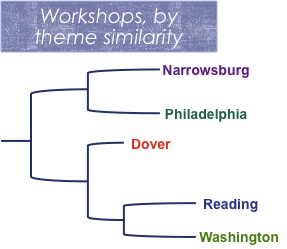 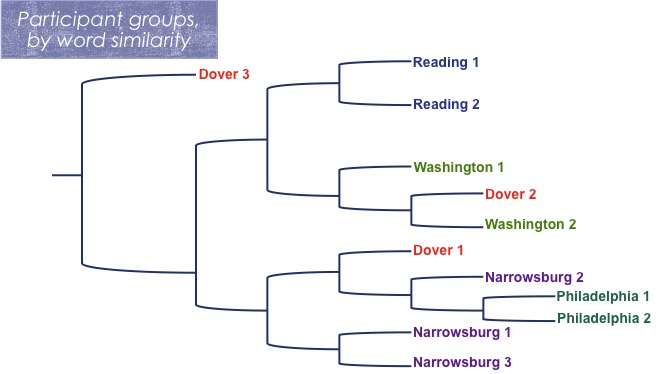 What we are learning from the workshop data will inform our next step in scenario development: a survey that will be disseminated basin-wide to gather additional, quantitative feedback. This values-gathering process will help us determine the direction of our future land use scenarios. We need your input throughout this process, so stay tuned for opportunities to stay involved!